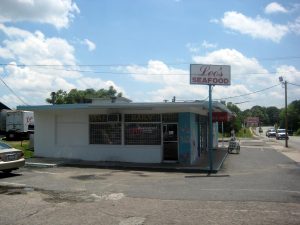 Landmark Targeting is a third component of gentrification incursion. Pursuing churches, historic sites, cemeteries, and other significant spaces is a gentrification tool and beachhead into disrupting and prepping communities for dispersal.

Not every space reflects traditional notions of historic value. Leo’s Seafood (pictured left) was a steadfast presence in Durham’s East Side, open for over thirty years. Leo’s was forced to close when the North Carolina Department of Transportation expanded Austin Avenue as part of a general reshaping of the community for gentrification.

As the Austin Human Rights Commission points out in a study on their city, “Austin officials have employed racial and ethnic double standards when it comes to the application of supposedly empirical historic preservation criteria, and have passively and actively supported the gentrification of East Austin in a variety of ways.” The Austin report is one of the very few studies to provide a significant discussion on how the city defines particular neighborhoods as “historical”, routinely offer demolition permits, and/or stymy rezoning and historical designation efforts by local residents.

The result is a two prong approach which both destroys historical and cultural landmarks along with preventing community residents from designating neighborhood spaces for historical value.